Indigenous Ways of Knowing: Answering the Calls to Action (2018)

Lesley Paulette is an aboriginal midwife of Mohawk descent, from the Six Nations of the Grand River. She is also a member of the Treaty 8 Smith’s Landing First Nation in Fitzgerald, Alberta where she and her husband have lived for more than thirty years.

Lesley’s interest and training midwifery date back to the early 1980’s. She learned from contemporary and traditional midwives alike. Lesley first became licensed to practice midwifery in the State of Texas in 1992 and was later among the first group of midwives to become registered in the Province of Alberta in 1998. She has offered midwifery care and birthing services to the women of Fort Smith, NT for the past 24 years.

The rebirth of community-based midwifery in Fort Smith served as the catalyst for the passage of midwifery legislation in the Northwest Territories in 2003. Lesley was instrumental in establishing a midwifery-led maternity care program within the Fort Smith Health Authority in 2005 and supported the development of the second program in Hay River. She continues to provide primary care while now working with the NWT Department of Health and Social Services to develop a territorial midwifery program.

Lesley is a mother and stepmother to a large family and a proud grandmother to nine grandchildren. 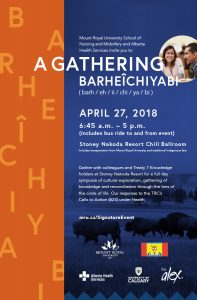