When you’re running late to class or to a meeting on campus, Mount Royal University’s carillon always lets you know.

Mount Royal is among the country’s only campuses with a digital carillon (with its 51-bell Soldier’s Tower, the University of Toronto is the only Canadian university with a true, bells-only carillon).

And you can bet Mount Royal may be the only Canuck campus carillon that plays the theme from Star Wars.

The 60-foot high Kerby Memorial Tower and digital carillon chimes hourly between 9 a.m. and 6 p.m. It plays four songs daily: two at noon and two at 6 p.m. With 50 songs in its repertoire, which shuffle and play at random, it takes two weeks to run through them. The repertoire is largely classical, but a keen ear will pick up familiar tunes including The Entertainer, Cabaret, New York, New York and Send in the Clowns.

Cockburn helped the carillon find its voice again – after falling into silence over the years, the digital bells returned in the mid 2000s. MRU’s 2010 centennial marked the start of daily chimes and tunes, thanks to Cockburn, who programs it to play. He performs live during convocation. Cockburn also hosts a free live Carthy organ concert in Wyatt Recital Hall on the second Thursday of every month.

Cockburn is performing a free, live outdoor carillon concert Monday, Oct. 27 at 12:10 p.m. as part of the Calgary Organ Festival.

The open air event is audible around campus but the best seats in the house will be listening from the TransCanada Amphitheatre at MRU’s Charlton Pond. 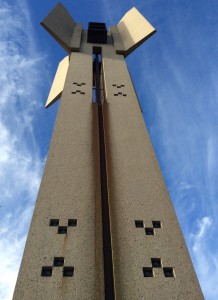 The carillon can either be played live using a keyboard in the programming booth of Wyatt Recital Hall or automated using a memory card.

Kerby Memorial Tower and its carillon was officially unveiled in 1972 — when the Lincoln Park campus opened — to honour founder Dr. George W. Kerby.

Reportedly, the carillon can be heard over a four-mile radius, making its broadcast the true voice of the university and part of Mount Royal’s architectural identity.