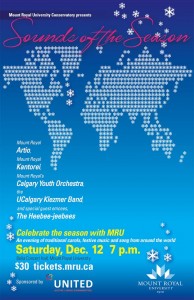 According to MRU Kantorei’s Artistic Director John Morgan, the sounds you hear in the Sounds of the Season program will be, “magical.”

“You’re going to get traditional, favourite carols and some hidden gems.” He explains. With selections including the University of Calgary’s Kletzmer Band’s arrangement of “Happy Hannukah” back-to-back with Handel’s Hallelujah Chorus, it certainly is a holiday show for everyone.

55 members strong, Kantorei is having an inspired season. “We’re tackling some large projects this year,” Morgan states, “We finished Mozart’s Requiem and are doing Vivialdi’s Gloria and the Music of Eric Whitacre in April (9th) in celebration of the choir’s twentieth anniversary.”

In his second year as Artistic Director, he’s proud of the interest the community has to sing together. This diversity in musical taste and backgrounds is finding its way into the repertoire for this holiday show. For example, “Whitacre’s Lux Aurumque is contemporary classical and we’ll be doing (YouTube sensation) Straight-No-Chaser’s version of the 12 Days of Christmas.”

Kantorei will be sharing the bill with their younger counterparts Mount Royal Artio (directed by Jean-Louis Bleau) and the Calgary Youth Orchestra (directed by Edmond Agopian). They’ll also be joined by their guest emcees, Calgary’s comic a cappella favourites, The Heebee-jeebees who can always be counted on to provide a festive comic punch.

For those who haven’t experienced the Bella Concert Hall yet, Morgan says, “It’s one of the best venues I’ve ever performed in.” The magnitude of that comment can’t be overstated when he concludes with, “and I’ve played Carnegie Hall.”

Come see Sounds of the Season at the Bella Concert Hall on Saturday, Dec. 12th at 7pm. Tickets at tickets.mru.ca