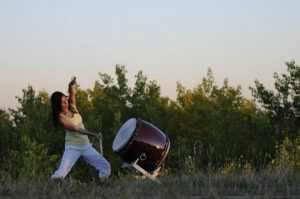 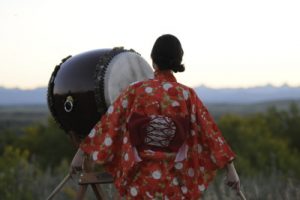 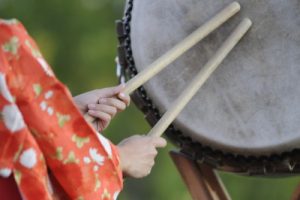 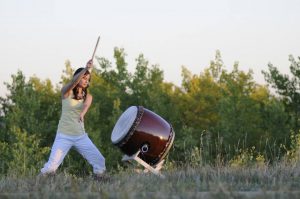 She recalls when her passion for performance was ignited, “I first saw taiko performed at the Heritage Day Festival in Edmonton in the late 80’s. I was immediately drawn to the natural rhythms, the thunderous booming sound, and the choreography that was incorporated into the music.”

Having studied ballet since age five and music since age 9 (she is also an oboist), she liked the synergy of the art form, claiming, “Taiko seemed to draw elements of both of those worlds.” Referring primarily to the Japanese group KODO, Nieckar admires the well-rounded commitment involved, “Professional taiko players are amazing athletes with training regimens that include long distance running, workouts, communal living, and strength training, in addition to intense drumming.” Though Nieckar will be offering a Youth Class (ages 10-15) and an Adult Class (age 16+) in the fall, it likely won’t be as intense. “Students should be prepared for a lot of fun,” she quips. “There’s some physical movement within their own physical capabilities, but there is no experience necessary.”

For those starting musicians of all ages who may be intimidated by notes on a page, Nieckar dispels that fear, “Taiko pieces are taught orally using a method of kuchi-shoga (a verbal cueing of the rhythm using syllables like ‘don’, “doko” or “ka”), and pieces are memorized rather than reading sheet music.”

She describes three sizes of drums that will be explored in class. “Large Odaiko drums have a very deep thunderous reverberating quality. The small shimedaiko have a more piercing high-pitched sound.” Finally, she identifies the popular chudaiko drum, “a medium-sized taiko that is often constructed from recycled wine barrels.”

Those who have experienced taiko performances, perhaps from Nieckar’s ensemble Midnight Taiko Kai in Calgary, will perhaps recognize two differing drum positions. Beta-dai is the upright flat-on-the-floor drumming that students will begin with and Naname is where the drum is raised and angled to enable a different percussive style and choreography. In all age groups, Nieckar will rehearse, “a variety of traditional and “open-source” repertoire, as well as introducing some basic improvisation.” Then she hopes to have a public recital on the final day of classes for family and friends to experience taiko performance.

According to Nieckar, this is a great time for the MRU Conservatory to start incorporating the art of taiko drumming in its musical programming. She says, “Some of my taiko peers are collaborating with rock bands, electronic music, ballet companies, classical music, television commercials, sports half-time shows and with choral music.” In fact, she addresses its growing presence in popular culture. “Photos of an interview with composer John Williams leading up to the release of Star Wars: The Force Awakens revealed an odaiko in the percussion section at the back of the orchestra.”

For fans of the Force, “these are the drums you’re looking for.”