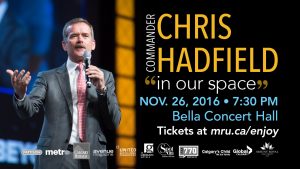 Colonel Chris Hadfield is landing in our space at the Bella Concert Hall.

The first Canadian astronaut to walk in space will be the first astronaut to set foot on the stage at the new Taylor Centre for the Performing Arts… and he’s bringing his guitar.

Hadfield states his keynote address will be, “A mixture of some Canadian stories, some space flight stories and a personal interweaving between the two.”

The high-flying author of two best-selling books just released his third publication, “The Darkest Dark” a children’s volume on conquering fear. It’s just one of his creative passions he has pursued since landing back on his home planet.

The Music To Your Ears Concert Season at MRU Conservatory, which has featured the likes of Ziggy Marley and Chantal Kreviazuk already this fall, celebrates the pursuit of musical excellence, and Hadfield is quite at home on a concert stage.

Fans wishing to hear the famed space cowboy strum a tune might just be in luck. As the first human to record an album of music while off-planet and cover David Bowie’s Space Oddity to the tune of 33 million views on YouTube, he knows how to attract an audience. Ticket holders on November 26th will likely hear something from the album, “Space Sessions: Songs From a Tin Can” which features original music by Hadfield and his brother David.

Due to these many passions, he’s excited to bring his experience to the concert hall environment. “My intent,” he says, “would be to tell some stories and use some music to help illuminate them.”

Although Colonel Hadfield’s performance is sold out, there are more stellar guests in this year’s line-up at mru.ca/enjoy.