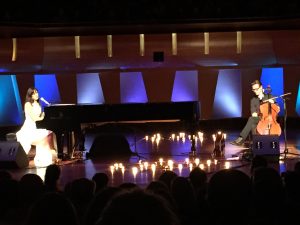 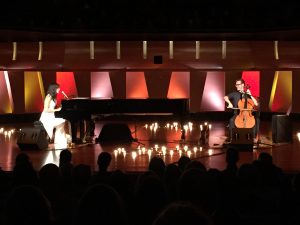 On the night of the American election, it was nice to celebrate being Canadian.  Even before the polls closed, a capacity crowd shared an escapist evening with the healing power of Chantal Kreviazuk’s music.

When you get the chance to see Chantal Kreviazuk, you expect a blend of storytelling, songwriting and most of all, musical excellence. For the sold out audience at the Taylor Centre for the Performing Arts’ Bella Concert Hall, that’s exactly what they got… but it wasn’t just Chantal.

Kevin Fox is a talent.

Most of the sold out crowd likely sighed to learn there was an ‘opening act’ before the songstress was to take the stage, but once he put bow to strings on his solo cello, they took it back. His rhythmic looping created a veritable orchestra filling the room with recognizable cover tunes from the Eurythmics’ Sweet Dreams to Paul Simon’s Diamonds on the Soles of her Shoes. An obviously gifted composer who, like Chantal herself, blended his classical training with a contemporary sensibilities. His charismatic ‘aw shucks’ style banter was an endearing note of gratitude to the title act and a love letter home to his wife and two young sons in Ontario, whom the opportunity of ‘the road’ has taken him away from.

His love song, commissioned by his wife of ten years, with its lilting feel of a nautical lullabye, was a highlight of the evening.

From the moment she took the stage, interestingly bagpiped in by MRU President Dr. David Docherty, she commanded the evening. With the warm glow of four light strings spaced across the stage as if waiting to deck the hall for Christmas, Kreviazuk, dressed angelically in white, took her place atop the tree.

Her connection with the audience was comfortable. She wove stories of her family with Our Lady Peace frontman Raine Maida while onscreen, she showed personal photos of their beloved family dog and a humanitarian trip to Peru.  Her regaling of rough emotional experiences which music has helped her through and, mostly, self-deprecating humour on the benefits of the touring life as an antidote to parenthood captured the audience.  She was a confident storyteller with the life experience to support it.

But when she sings, you can’t help but listen.

The vocal powerhouse shone in the Bella Concert Hall with heart-felt power ballads well into the evening. Playing a majority of new repertoire from her latest release Hard Sail, which perhaps ironically she ‘hard-sold’ in each of her intros, despite not having the new release at the merch table, she mesmerized with a soundscape of eight years worth of life in song.

A Conservatory-trained pianist, she’s a marvel on the Steinway. Her graceful and melodious descants harkening a classical motif were blended seamlessly with the power of a modern ‘three-verse with a bridge’ songwriting formula. It’s no wonder her hooks have been sung and recorded by the likes of Pink, Rhianna and Christina Agulera.

The listening audience (you could hear a pin drop) thoroughly enjoyed the hits…perhaps more than Kreviazuk herself. Where she took the time to set up each of her new compositions, it felt like she was moving through the previously enjoyed repertoire. The majestic power of “Feels Like Home” and “All I Can Do” were comfortable memories, but slightly heavy-handed on both voice and piano. The addition of Fox’s cello and vocals rounded the classics out nicely, often filling in for what might have been lost in the non-studio version.

As she set up her beloved cover “Leaving on a Jet Plane” which launched her to fame when it was prominently featured in 1998’s blockbuster “Armageddon”, she invited an audience member onstage to sit beside her. Her lucky victim, “Jason”, an electrician with a calm demeanour and untrained singing voice, enjoyed the best seat in the house, and was a great sport as Kreviazuk sang her showpiece to and for him.

At the end of the night, it was obvious that Kreviazuk continues to be the real deal. Stripped of studio production, what she was able to accomplish with keys and voice (with supporting cello) was a testament to the creative best of Canadian pop.

But the real star of the evening was the Bella Concert Hall. With such intimacy of space and acoustic prowess, both artists onstage resonated beautifully. In fact, they both proclaimed it. Fox, who’s all-too-short opening half hour was seasoned with genuine wishes to continue playing in the hall all evening, took the liberty of ‘testing’ the hall’s acoustics in his final rendition of Joni Mitchell’s “River”, by pulling away from the microphone and singing upstage towards the lucky audience members in the choir loft, letting the reverberation of the room carry his voice effectively without amplification. It was magical.

Kreviazuk herself noted, especially on the historical American election night, that the fact that we had this exquisite hall made her “proud to be Canadian.”