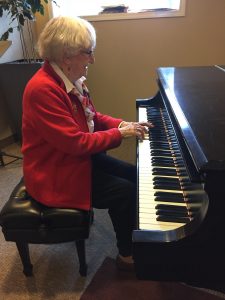 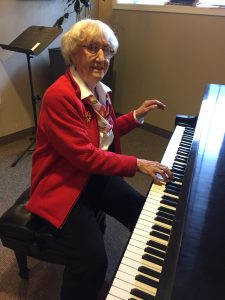 “Do you have a piano teacher who can teach a 90 year old who hasn’t played in 30 or 40 years?” was the question that started it all.

The answer was ‘yes’.

Not only has Mary been taking private lessons throughout her nineties with Conservatory instructor Kathy Dornian, she has been offered to play as a featured soloist in the Festive Favourites series concert Sounds of The Season at the Bella Concert Hall on December 17th.

Fenwick claims this all started with her daughters who suggested, “If you do something you haven’t done in a long time, it’ll stimulate your brain.”

So, she took to the piano.

The reason was both emotional and logical, “If I take piano lessons,” she thought, “I’ll love it. There’s always a piano in the house.”

Like many budding pianists, there were challenges with practicing. “When I started, I practiced here,” she says, indicating the common area at the Garrison Green residence. But I had to come at either 8 in the morning or 9 at night… and that’s not when you want to practice.”

She opted, instead, to invest in her education. “I bought myself a Roland digital piano from Steinway. It’s in my room.”

The reaction hasn’t always been positive. “One of the ladies here, when she heard I was taking piano lessons said, ‘isn’t that an unrealistic goal at your age?’” Fenwick laughs off the critique, “I don’t have time to be a concert pianist. I’m doing it for my joy… for my soul. And I’m getting so much out of it.”

The idea for her to take the stage was originally misinterpreted. A suggestion was presented by Jean-Louis Bleau, Program Administrator, General and Orchestral Programs for Mount Royal University Conservatory for her to join the ensemble in a Christmas carol.

“I thought it was just to have a person in the choir,” she claims, “but the part was soprano and I sing alto.” Feeling that the vocal range might be too high, Fenwick approached Kathy Dornian saying, “I can’t do it cause I’m an alto.” To which, Dornian, who was in on the suggestion, set the record straight by asking, “What does that matter if you’re playing the piano?”

Bleau, who is also the conductor of Artio, the youth choir who will be onstage collaborating with the Calgary Youth Orchestra and Mary for her Bella debut, claims this casting is a no-brainer. “United Active Living sponsors our Festive Favourites shows,” he says noting that December 11th’s Winter Fantasia features some of the Conservatory’s youngest performers, while Sounds of the Season on December 17th is for the more mature performers, including Mary. “We thought it would be wonderful to involve someone as young and vibrant as Mary. Her youthful energy fits with this youth ensemble.” Bleau continues, “Mary’s the perfect example that the pursuit of music is a lifelong one.”

As for the repertoire for this combined ensemble, Fenwick pipes in, “I’ll be playing Hark the Herald Angels Sing.” She adds, “I’m playing the main verse and they’re singing the descant.”

Undoubtedly, all eyes and ears will be on Fenwick as she sits at the Steinway, not the least of which will be her two daughters who have planned to travel from Victoria and Cranbrook British Columbia. It’s somehow fitting that these concerts are primarily to bring families together to support the wonderful music education being offered all semester long.

But for now, Mary is strategizing for the big show. “I’ll practice this like crazy.” Smiling, she nods, “It’ll work out,” she says, then winks, “Kathy will help me.”