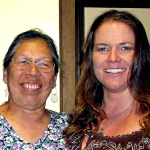 Madonna Thunder Hawk was involved in the American Indian Movement occupation at Wounded Knee; she is co-founder of the Black Hills Alliance, a coalition established to stop uranium mining in the Black Hills. She was also a co-founder of Women of All Red Nations in 1978 which exposed how uranium mining was the source of radioactive water contamination causing ectopic pregnancies and other reproductive health issues for Native women. Finally, she organized the 1980 Black Hills International Survival Gathering bringing together over 10,000 global activists concerned with the environment.