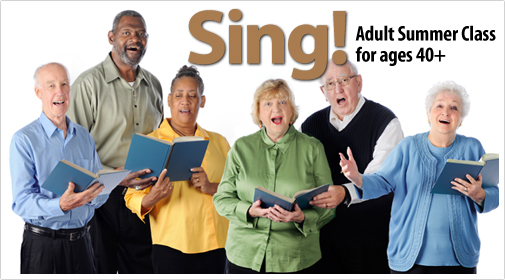 But he changed that by signing up for Mount Royal’s adult singing classes.

Even though he was familiar with basic musical notation and could play “one-handed keyboard, reasonably well,” Marwood, 68, says he was longing for a better singing experience.

“I find that with choirs, the director is hesitant to provide individual feedback as they don’t want to embarrass anyone,” he said. “So any feedback is general, and one is unsure if it applies to them. That diminishes the individual learning experience. So I was looking for more voice instruction that was specific to me.” 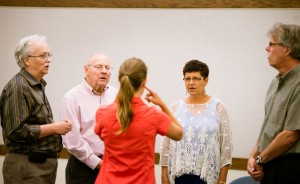 “I knew Mount Royal had an extensive musical program. That’s how I found Sing!”

For five days last summer, Marwood joined the summer camp for adults. He says the class delivered what he’s been searching for.

This August, popular instructor Louise Campbell and her Sing! Adult Summer Class is back.

“Louise’s class met all of my expectations. It was a small group and Louise worked hard at making individual feedback comfortable. So I felt I received good voice training in a comfortable and non-judgemental environment,” he said.

“I’m a big fan of Louise and her program.”

“Singing can be a bit of charged subject for people because many people have been told that they can’t sing or just feel like they can’t for whatever reason,” says instructor Louise Campbell.

“First and foremost it’s a lot of fun. Anytime you try something new, it’s a boost for your confidence,” she says.

In a world where classical musicians strive for perfection playing every note written, making it up as you go along is largely left to jazz.

But Gabriela Montero has managed to play both sides, winning over critics and fans alike.

The Venezuelan-born American pianist was a child prodigy, performing concertos with the national orchestra at age nine:

While Bach, Beethoven and Mozart were no strangers to improvisation, the classical world has long moved away from it.

But as a classical musician, Montero brings a wealth of knowledge and sheer talent to improvising the work of the masters. And the results are stunning.

Montero puts it best: “It’s spontaneous creation. It’s spontaneous music making. And is it perfect? I don’t know. It’s not, I mean it’s something that is just born and dies,” (she told CBS 60 Minutes).

She is teaching master classes for our Academy for Gifted Youth students as part of our Wyatt Artist in Residence program.

And stay tuned for our announcement for the star-studded lineup for the 2014-15 Wyatt season.

It’s what parents and teachers dream of: early music training is proven to help children succeed in the long run.

Music training for youngsters may increase the neural connections in regions of the brain associated with creativity, decision making, and complex memory, according to studies from the Society for Neuroscience.

And research also finds that introducing babies and small children to rhythm, melodies and instruments early can be even more helpful to them later in life.

Researchers are saying that beginning children’s music training before the age of seven has the greatest impact on brain anatomy in adulthood. 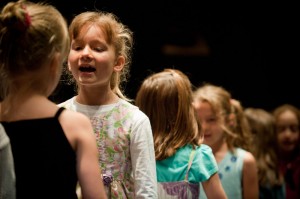 The fun-focused day camp lets children ages 5-9 explore performing arts including song, dance and drama. It offers enrichment for children already in Conservatory programs, or an introduction for students new to the Conservatory:

She’s living in Paris and performing on stages all across Europe now, but Calgary-born mezzo soprano Andrea Hill says her heart will always be in her hometown.

Spring will see her performing throughout France and at Italy’s world-renowned opera house La Scala.

But the singer always makes time for family here in Calgary.

During a visit home last week, Hill took some time to reconnect with her family at the Mount Royal Conservatory, too. The Academy for Gifted Youth alumna chatted with us about her exciting future performances, and reflected on her beginnings as a student in the Conservatory.

“I spent a lot of time at Mount Royal as a kid,” said Hill, who had an early musical start playing piano at age two and singing in children’s choirs.

But after singing her first solo at 14 (we asked: it was “When I Sing” written by Canada’s Bill Henderson for the movie Bye Bye Blues), Hill’s focus on performance became stronger.

It helped that her Mount Royal Conservatory voice teacher was also artistic director of the Academy for Gifted Youth vocal program.

“Elaine was the catalyst,” said Hill, 33. “I come from a very non-musical family, a very academic, engineer-oriented family. Before I met Elaine, music was a hobby. It was never something I considered doing for a living. She was the person who showed me it didn’t have to be something on the side. She encouraged me.”

By age 17, Hill successfully auditioned for the Academy.

That stepping stone led Hill to McGill University where she earned a Bachelor’s of Music with high distinction. She also gained a Master’s of Music at the University of Maryland.

“It gives something of a launching pad. You’re still at home but you have these wonderful teachers and clinicians. These kids are speaking with acclaimed artists to learn firsthand to see if you like it, do you want to work on these languages, the pressure of having to learn it and get it mounted. It really adds more depth.”

Since 1980, the Academy training program has prepared young students for future music study. Not all students pursue a professional performance career, but the program sets them up for success.

“It’s quite intense,” said Hill. “I remember learning IPA (International Phonetic Alphabet’s system of symbols for pronouncing vowels and consonants in all languages). I met people at  McGill and during my Master’s degree who had not yet learned IPA, I learned that in the Conservatory. They really do go in depth into the tools that are required.”

Hill now keeps a hectic schedule traveling the globe for festivals and performing on the operatic stage. She is well-known for her talents throughout Europe. She recently performed her first role as Carmen to critical acclaim, and landed the role of Hansel in the Paris Opera’s upcoming production of Hansel and Gretel.

“Mostly my life is singing, learning scores and operas, and fun creative projects on the side, like piano and knitting,” she said.

“I’m getting to a point where I know how to use my own instrument.”

Check out Andrea Hill’s website for details on upcoming performances.