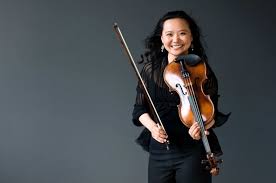 Teng Li was one of the first viola students in the Morningside Music Bridge summer program 16 years ago.

Teng began playing violin at age five in China, and entered Beijing’s Central Conservatory in 1992. By age 16, she was studying viola at the Curtis Institute of Music in Philadelphia. That was the year she came to Calgary’s Mount Royal Conservatory for Morningside Music Bridge.

Now, Teng Li is principal violist of the Toronto Symphony Orchestra and teaches at the University of Toronto and Montreal’s Conservatoire De Musique.

She says even with her strong early musical education, Morningside Music Bridge offered a new level of learning:

Teng Li: I find that coming to Music Bridge was the start of my mind working with my musical spirit. I learned a lot about why you do certain things, what makes sense with your musical feeling and if it doesn’t make sense, how you make it work.

Question: You were a gifted young student, but you mentioned something happened when you came to study in Calgary as a teenager.

Teng Li: It was difficult at first, it was a transitional period. For Chinese students, that’s what the program helps them to do, especially at this age, from 12 to 18. That’s really when you form your opinion about things and the program really helps you to learn that the more experience people have, the more they learn about music. And you’re trying to learn music in your way.

Question: What is it like coming back to MMB after being a student?

Teng Li: This really is like a family. You come back and you have that connection.