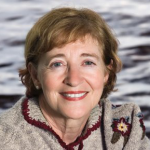 National Chairperson of the Council of Canadians

Maude Barlow is the National Chairperson of the Council of Canadians and Senior Advisor on Water to the United Nations. She also chairs the board of Washington-based Food and Water Watch and is a Councillor with the Hamburg-based World Future Council.

Maude Barlow was one of the “1000 Women for Peace” nominated for the 2005 Nobel Peace Prize. In the same year, she received the prestigious Lannon Cultural Freedom Fellowship as well as the Right Livelihood Award. Known as the “Alternative Nobel” and given by the Swedish Parliament, the Right Livelihood Award cited her “exemplary and long-standing worldwide work for trade justice and the recognition of the fundamental right to water.” She also won the Citation of Lifetime Achievement Award at the 2008 Canadian Environmental Awards, Canada’s highest environmental honour.

Recently Maude was named the first Advisor on Water to the United Nations where she advises Father Miguel d’Escoto Brockman, the new President of the General Assembly.

Maude is also the star of several documentaries about water. She is also the bestselling author or co-author of 16 books, including the recently released Blue Covenant: The Global Water Crisis and The Coming Battle for the Right to Water.