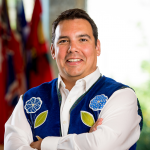 Dr. Niigaanwewidam James Sinclair is Anishinaabe, originally from St. Peter’s (Little Peguis) Indian Settlement near Selkirk, Manitoba, and is an Associate Professor and current Head of the Department of Native Studies at the University of Manitoba. He is an international commentator on Indigenous issues for outlets like Al-Jazeera, The Guardian, and national broadcasters like CTV, CBC, and The Globe and Mail and was named one of CBC Manitoba’s “Top 40 under 40” in 2015. Niigaan is an award winning speaker, writer, and editor of such books as The Winter We Danced: Voices of the Past, the Future, and the Idle No More Movement (Arbeiter Ring Press, 2014).