Join international designer and creative director Kat Marks as she delivers her second Thought Talk on March 19th.  Her lecture is entitled, “Your Ideas Are Not Your Own” and will be followed by an interactive hands-on workshop.  This speaking event will be held on March 19th from 4:00-5:30pm in the Bissett ​Boardroom EB2061. Everyone is encouraged to attend and faculty should feel free to invite students.

In designated Community Service Learning (CSL) courses, MRU students participate in structured volunteer opportunities where the needs of the organization are linked to their course learning. There are approximately 30 designated CSL courses at MRU and the number is growing.

Over the past 2 years, ADC has supported Victoria Calvert in her role as CSL Coordinator, to put necessary supports in place to build and document the CSL presence at MRU. Accomplishments in this area include:

The Chartered Financial Analyst (CFA) Institute Research Challenge took place on March 7, 2015. Cathy Roy-Heaton’s team of Alfred Chow, Davinder Jhutty, Riley Rodewold,and Ben Scott represented the Bissett School of Business this year in the CFA Institute Research Challenge (Canadian Prairies) competition. This is the fifth consecutive year that we have entered a team in the competition. In keeping with a growing history of strong performances from MRU teams, this year’s team made a strong presentation that had any Mount Royal observer beaming with pride. In a field of contestants that has been growing in size, and where only one winner can be chosen, the team once again demonstrated that not only do we have a right to be there, we can give everyone a run for their money.

Much appreciation goes out to the team for the hours they have spent over two semesters preparing their report and their presentation. Many thanks to Cathy, whose leadership in this makes it possible for us to compete, and to our industry mentor Stephen Paget, who gives many hours to our team in the months leading up to the competition.  This year’s competition was on Big Rock Brewery; students submit a written report in advance of the competition in addition to their presentation.  The group has once again set the bar high for the next team that follows in their footsteps.

On Saturday, March 14th MRU hosted the The Western Region Canadian Institute of Financial Planners Case Competition for the 2nd year in a row. We also had a team in the competition comprised of Hervin Pesa, Danni Richardson, and John Santiago who won the Silver Medal in what was an extremely close race. The team had spent much time in practice scenarios in the weeks leading up to the event, and their efforts paid off. Much thanks goes to Sean Bjorklund, who instructs two of our FNCE courses, and who volunteered much time to coach and mentor our team. Apart from their medals, our students receive significant cash prizes towards the completion of their CFP capstone courses and exams.
Throughout the event it was mentioned from executives of the CIFP from Toronto and Sunlife, who sponsored the competition in whole, how impressed they were for the second year in a row with the organization of the event, including the wonderful banquet at Heritage Village on Saturday night. They repeatedly made reference to the work done by Callista who made the whole thing happen without a hitch, and with class. If you see our contestants, Sean, or Callista, please be sure to pass on your congratulations on a job well done.

The Enactus Western Regional Exposition was held on March 12th & 13th. Our students distinguished themselves once again thanks in part to Wendelin Fraser’s hard work and dedication to the team.  While I know the students are very talented, there is no doubt that they also benefited significantly from Wendelin’s coaching and guidance.

Not only were the group of 42 students from Mount Royal University outstanding ambassadors, the team received four awards for their efforts.

There were also 12 former ACE/SIFE/Enactus Mount Royal students at the event but participating now as judges, volunteers or organizers.  Several of those Mount Royal students who were with the SIFE Mount Royal team in 2001 are now leaders in our community, operating their own businesses and still volunteering.
Gratitude is also expressed to Paul Varella, James Stauch, Ray De Paul, Valerie Kinnear, Douglas MacDonald, Anne Stone, Carolyn Sterenberg, Wayne Stewart, Jim Campbell and Martha Taylor for supporting the team this year.

One of Francine Masse-Bannon’s photos was selected for the Top 10 by the judging panel for the 100 Views of the World Photography Contest.

Photo:  Elephant, Up Close and Personal
Voting will open March 11 and close March 18.  Please review the pictures on MyMRU and if you like the Elephant please vote for it (one vote per person, must have an MRU ID#).  Francine needs all the votes she can get and very much appreciates your help.
Winners will be announced March 23 and the Gallery on the 3rd Floor of EB on campus will be graced with the Top 10 Photos by the start of spring term.

And, we have a winner!

The staff bulletin board of the Bissett School of Business is now the
“Bissett Insider”
http://blogs.mtroyal.ca/insider

On the right side menu you can also access the archives of the WiggleRoom.

Thank you to all who voted for the new name for the bulletin board. 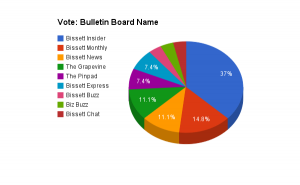