The Assad Brothers are performing Nov. 9. Tickets are available now.

The Brazilian-born classical, Latin and jazz infused Assad Brothers aren’t just treating their Calgary audience to an unforgettable concert: they’re here to instruct our Academy for Gifted Youth Guitar program as part of the Wyatt Series.

And the students are in for the masterclass of a lifetime, says Murray Visscher, Academy program co-coordinator and ensemble coach.

“I remember first hearing the Assad Brothers while I was in university. They had recently released the album, Latin American Music for Two Guitars, and they were coming to perform in Vancouver. The concert was amazing. They were fast and fluid with effortless ensemble, filling the room with their contagious passion for the works that they played,” said Visccher, who received his Masters Degree at the San Francisco Conservatory and has performed for audiences in major North American cities.

“I went to the concert with a group of guitar student friends and we all went away wanting to play just like that. The Assads have been a huge inspiration to my generation of guitarists and they continue to inspire. I’m thrilled that our Academy students have the opportunity to share the excitement that has motivated so many players to challenge their musical and technical boundaries in an effort to simulate the achievements of Sergio and Odair Assad.”

Sérgio and Odair Assad have set the benchmark for all other guitarists by creating a new standard of guitar innovation, ingenuity and expression.

The Assad Brothers are setting new performance standards and are playing a major role in creating and introducing new music for two guitars.

Mount Royal Conservatory’s Academy Program for Gifted Youth began in 1980 and is an enrichment program providing musical training of the highest quality for gifted young artists.

The Academy Program offers participants a balanced, performance-based course of study, as well as opportunities to meet and perform with professional musicians and renowned teachers.

DID YOU KNOW? The Wyatt Artist in Residence series honours Hal Wyatt and his late wife Marnie, long-time friends and supporters of the Mount Royal University Conservatory.

Our stellar faculty and guest artists. No other music school offers students as many master classes and clinics with top-notch performers.

This week is no exception. Tonight’s woodwind/brass technique classes for our Academy are featuring our own faculty and adding Michael Hope to the roster. Hope, assistant principal bassoonist with the Calgary Philharmonic Orchestra, has performed with nearly every Canadian orchestra and appeared with many symphonies in the United States. He’s also a noted vocalist: Hope’s new CD, “Hallelujah,” is nominated for Inspirational Album of The Year for the Gospel Music Association of Canada 2014 Covenant Awards.

The Conservatory is feeling full of Polish pride as two of our own are taking to the stage this week.

Polish concert pianist Krzysztof Jablonski is performing with the Calgary Philharmonic Orchestra Friday and Saturday. And our own Edmond Agopian – music director of our Calgary Youth Orchestra — is conducting the concerts.

Pairing Jablonski and Agopian is a significant event for both our Conservatory faculty members.

Says Jablonski: “So far it feels so good, natural.  have a feeling that we’ll have no trouble finding common music language, to express through music in ways that will give us both big satisfaction. I very much liked his own interpretation of Chopin’s concertos, where he is finding space to create his own music his own way, enriching it in a sensitive way and still managing to make it work together.”

Violinst and conductor Agopian, who hails from Romania, has been on the Conservatory faculty since 1991. He studied at the Julliard School, University of Toronto and in Switzerland. His violin students are national and international award-winners and perform as soloists with professional orchestras.

We caught up with Edmond Agopian and asked him to share some thoughts about this week’s concerts.

Question: Tell us what it’s like working with Kryzsztof Jablonski.

Edmond Agopian: Working with Krzysztof is a real treat. He is the consummate artist. He has dazzling technique but his virtuosity in the Chopin concertos is unobtrusive; instead, it is poetic and lyrical, which makes the music sound sublime and entrancing. He is a gripping soloist who will enthrall and captivate the audience from the beginning to the end.

Question:  Besides Chopin, what can you tell us about the program you’re conducting?

Edmond Agopian: The program will also include orchestral works by other major Polish composers, composers who are rarely heard in Calgary: Gorecki, Szymanowski and Noskowski. These are exciting works that cover a broad range of styles and expression, and I am really looking forward to introducing these works to the CPO and to the Calgary audiences.

In 2005, Agopian was awarded the Alberta Centennial Medal in recognition of outstanding achievements and service to the people and province of Alberta. The University of Calgary awarded him with the J. P. L. Roberts Distinguished Professorship in Fine Arts.

Mount Royal Conservatory’s Gianetta Baril is off on an amazing year-long adventure: the award-winning harpist — who has taught private harp lessons at Mount Royal since 2003 — is heading to Brazil teaching music to children in Rio’s urban slums.

But first, Gianetta is exploring Fiji and volunteering in Nepal. (See her interview on CTV)

The Juno Award-winning harpist has worked hard fundraising to purchase harps for children through Brazil’s Social Action through Music project. She begins teaching there in January. The SAM project teaches children to play instruments and join an orchestra. Since it began in the 1980s, graduates are now playing as professional musicians in orchestras in Brazil and abroad. The program loans out 220 violins and 24 cellos, but only had one harp. Baril aims to change that.

“I’ll have three months to establish two brand new programs – one in the slums in Rio and the other in six churches in the same city,” says Gianetta.”My intention is to have enough of a foundation in place in both projects that the students will be able to thrive once I leave.”

You can follow Gianetta’s sabbatical adventures on her blog.

Gianetta’s vision and hard work is another fine example of Conservatory faculty who help make us a special place. 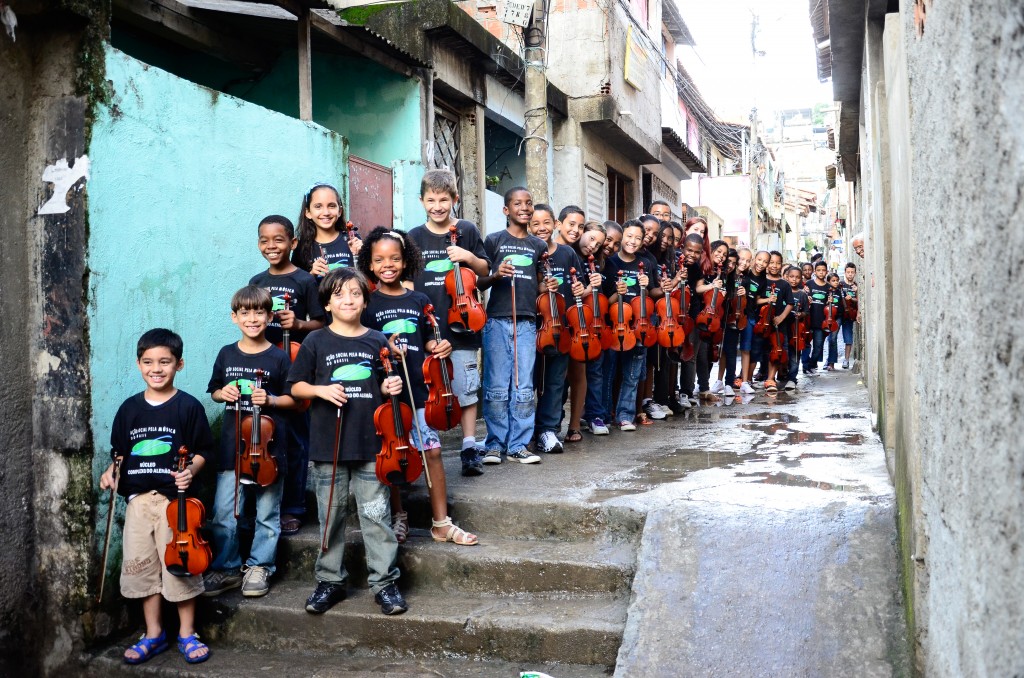