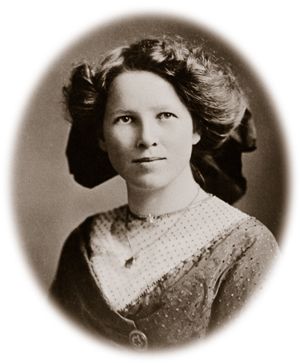 The concert hall is named in honour of Mary Belle (Sherwood) Taylor, the matriarch of Calgary’s Taylor family who generously donated to make the project a reality.

Loved ones called her Bella – Italian for beautiful and a commonly used musical term – so it’s a perfect fit.

Want to learn more about Bella?

With a goal of making life better for everyone around her, Bella succeeded at every turn.

Whether it was scratching out a new life on a southern Alberta farm as a young bride, supplementing tough times by supporting her family or rallying for a much-needed community school, Mary Belle orchestrated success.

“She was a great Alberta pioneering woman, in every sense,” said son Don Taylor.

The  Bella Concert Hall — at the heart of the new Conservatory  — is named in honour of the Taylor family matriarch Mary Belle (Sherwood) Taylor (1891-1972), known simply as Bella to loved ones.

Slated to open next fall, the city’s much needed mid-sized professional concert hall would not have been possible without a generous $21-million contribution provided by the Taylor family.It’s the largest private donation in Mount Royal University’s history.

The concert hall will serve music students and audiences, as well as providing a hub for a broad range of performing arts activities for the community.

The story of Bella is the story of true pioneering spirit. In the spring of 1912, the 21-year-old bride boarded a train in Kingston, Ontario, bravely heading west to start a life farming with her husband on the Prairies. After the family lost the farm in Barons, Alberta during The Depression, Bella moved to Calgary where she began ran a boarding house for 12 years to help support her family.

“She was an incredibly great lady and very hard-working,” said Taylor.

Bella was an enthusiastic supporter of education and was instrumental in bringing an elementary to Grade 12 schoolhouse to serve Barons, a rural village located 170 kilometres south of Calgary. The school was featured as a filming location in a scene of the 1978 film Superman.

“It was such a small community, it couldn’t be justified. But she campaigned with the local and provincial governments. And it happened solely because of her efforts.”

Much like Bella’s efforts to further education, the Taylor family’s philanthropy will benefit music lovers and theatre goers for generations to come.

“If my mother was here I’m sure she would be justly proud,” said Taylor.