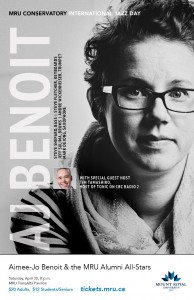 On April 30th, 2016, you’ll find Herbie Hancock, Aretha Franklin, Diana Krall and Sting at the White House.  There will also be some jazz music featured in Bologna, Italy in the Jazz 4 Peace Celebration, and in the Quartet Diminished in Concert show at Niavaran Hall in Tehran, Iran.

Jazz music brings together the improvised solo expressions of individual instruments into an artistic whole in a combo.  That’s the message of UNESCO’s International Jazz Day, celebrated this year on April 30, 2016.

DeJong, who’s the new Artistic Coordinator at MRU Conservatory, has composed a special something to celebrate at the TransAlta Pavilion, “We are celebrating some of our renowned jazz alumni. We’re featuring a great local vocalist by the name of Aimee-Jo Benoit. She has a great following with indie bands like Woodpigeon. Joining her are some former grads of the Jazz Program.”

The program is made up of some jazz standards, “She’s going to dive in to the American Songbook for those ‘tin pan alley’ chestnuts.” DeJong continues, “then some jazz originals and really creative interpretations of some of her favourite Canadian icons like Joni Mitchell and Neil young.” No matter what the source inspiration is, DeJong insists that Benoit promises to, “breathe new life into them.”

He would know first hand.

DeJong is among the esteemed alumni joining Benoit onstage with saxophone in hand. “This is my first presentation as the new Artistic Coordinator at MRU Conservatory.” he says, “One of the things I wanted to do was be involved in the early shows both as a programmer and on the ground on the stage.”

As a unique UNESCO moment, DeJong and the combo are excited to have CBC’s Tim Tamashiro take the stage as guest emcee. “Anyone who’s a jazz fan in Canada knows Tim… not only with his incredible career as a jazz vocalist, but as the host of CBC Radio 2’s Tonic.” The ‘drinky’ jazz crooner will be on hand to spread the harmonious message to the jazz community, “he’s such an energetic and creative personality,” DeJong says, “We’re really delighted that he’s able to join us.”

Benoit, DeJong and Tamashiro are warming their chops for April 30th. To celebrate UNESCO International Jazz Day with the rest of the world, click here, or head to the White House.