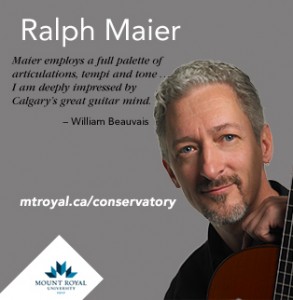 In fact, I know one. Ralph Maier… and if I knew many more, he’d likely still be my favourite vihuela player. The instrument, he explains to me, “is the Spanish equivalent of a lute…except it’s shaped like a guitar.”  A gifted guitarist, he touts, “Over the last ten years, I’ve gotten into doing things on period instruments.”

Maier is not only an expert to those who have the privilege of hearing him, he’s backed it up with the academic research, he finished a Musicology PhD in Spanish Renaissance Music in vihuela. So, for those who are interested in hearing a master at work, check out his upcoming recital Ralph Maier & Friends on Sunday, May 1st, 2016 from 2-3pm in the TransAlta Pavilion of the Taylor Centre for the Performing Arts.

Not only will he be strumming a vihuela, Maier’s program includes some pieces on the Baroque guitar, which is a five-course instrument meaning it has five pairings of strings to strum. The strumming, traditionally, was meant to accompany dancing, so there are a series of universal chord progressions known to many players of the time; much like a Blues progression today.  The progression, Maier says,“became a staple. Then, composers would write a variation on it.” Among those composers, he lists Bach, who added his own touch to the Spanish plucking tradition. Maier’s study of the form has led him to complete his latest CD, aptly titled “Variations” which is available on both iTunes and CD Baby.

Musically speaking, he gets history. My personal history, having known Ralph for nearly two decades, is that there’s nothing he can’t play on a guitar. Tim Brady is a contemporary composer who wrote a piece for 20 electric guitars.  Maier was one of the twenty.  He was so inspired by this composition that he recorded it for his latest CD, playing all twenty parts multi-tracked. After recording it, he sent his interpretation to the composer.  His reaction, according to Maier, was, “he liked it and that was very reassuring.”

Recently, in addition to his teaching at MRU Conservatory he has been teaching university classes like The History of Led Zepplin, Progressive Rock Music and The History of Heavy Metal. “I’m all over the place, musically.”

Maier will be reuniting with the Oberon Guitar Trio (Brad Mahon & Murray Visscher) as well as teaming up with flutist Tim Janz for this program.  As to what era their contributions might represent, it’s anybody’s guess.

When I asked directly what we could expect in this Spotlight Series Concert, his answer was confidently nebulous. “I’m not absolutely sure.”

Such is the secret of a true modern Renaissance man.