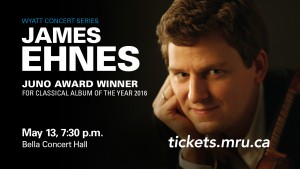 The New York Times reported that, “superb violinist Christian Tetzlaff pulled out of an important concert at Carnegie Hall.” It was for an arguably more important occasion as he flew home to Germany to welcome a new addition to his family. The remaining trio of Leif Ove Andsnes (piano), Tabea Zimmermann (viola) and Clemens Hagen (cello) were left without a premiere violinist to play Brahms’ three piano quartets on the famed stage.

Ehnes, who will be appearing at the Bella Concert Hall as a part of the Wyatt Concert Series on May 13th, 2016 describes his last minute substitution as “quick, crazy and fun.” The Times reviewer Anthony Tommasini thoroughly praised the fill-in’s contribution, “Mr. Ehnes’s velvety sound and sensitivity fit well with the vibrant playing of his colleagues on this night.” There’s no doubt his notable contribution was appreciated by his esteemed collaborators and the audience alike.

Now back home with his family in Florida, Ehnes takes a breath to reflect on the quartet’s shows which included performances at Chapel Hill, North Carolina and at Orchestra Hall in Chicago. He also has a moment to acknowledge his recent Juno win for Classical Album of the Year which was announced here in Calgary. “We work so hard on these albums, it’s nice to be recognized.” A humble comment for an artist who has now won eleven of the coveted prizes.

“The genesis for each (album) is different,” he explains. “Andrew Armstrong and I have pieces we’ve played a lot over the years. When you work with a collaborator, at some point, you get to where you feel like everything is clicking. If you have the opportunity to record at that point… that’s when you want to. We were having our moment,” he continues, siting his accompanist Andrew Armstrong who he has collaborated with since 2001 and will be joining him onstage at the Bella, “There was no P.R. plan. It was just the two of us saying we like these pieces… let’s record them.”

Calgarians will rejoice to see the pair tackle works by Brahms, Handel, Beethoven and Canadian composer Bramwell Tovey, but that’s not the only partnership they’ll witness. Ehnes’ oldest collaborator is The Marsick, the Stradivarius violin crafted in 1715 and named after a Belgian violinist of the late 1800s. “It’s been like a family member,” Ehnes says. He first saw and heard the instrument in 1996 at age 20. He imagines the life of the instrument in context, “It’s incredible to think that you’re only a custodian for a short period,” his respect for the Stradivarius is unwavering, “I’d love to think when it leaves my hands it’s no worse off than when it came in my hands.”

His whole family will be joining him for this leg of his 40th birthday tour. For his children, whom are Canadian but live in the U.S., this drive from Vancouver to Winnipeg with concert stops along the way is a great way for them to experience their homeland. “I wanted them to see all these places across Canada that have been good to me.” Ehnes reflects with both patriotic and paternal pride. “I want them to see the scale.” 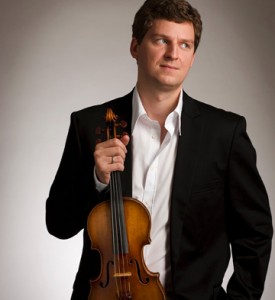 Their family tour will be documented by filmmaker and close friend Nate Bauer who will be shooting footage from the road and backstage. As to what the collected documentary clips are used for, time will tell. Until then, it’s a marvellous family video.

Expect to see the cameras rolling as Ehnes and Armstrong take the stage at the Bella on May 13th, 2016. It will be their debut at this venue and Ehnes is excited. “I’ve been hearing wonderful things about it,” he admits, “lots of people have said it’s a great sounding hall.”

As he prepares to return to Calgary to team up with Armstrong and The Marsick at the Bella, there’s no doubt he’s glad he got to play Carnegie Hall to warm up for it.