It’s the Year of Music in Calgary.

We have this brand new Bella Concert Hall in the Taylor Centre for the Performing Arts at Mount Royal University. Its award-winning design and already renowned acoustics are freshly ringing in the ears of all who have been there. Like any proud parent, MRU Conservatory wants to show its baby off.

Now that we’ve brought the Bella into the world, it’s time to bring the world to the Bella! It’s with that mission that we introduce Music to Your Ears our 2016-17 Concert Season.

Tonight, we announce the artists in 7 Concert Series. They represent the quality of music you expect from an institution like MRU Conservatory, but also reflect the diversity of our musical reach and mandate moving forward. Most in our hometown have turned to MRU Conservatory for exceptional education and programming, and this season promises to offer more musical styles from the world’s best artists who will resonate with all Calgarians. 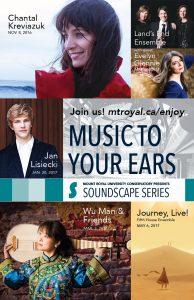 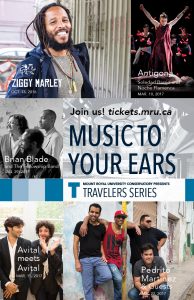 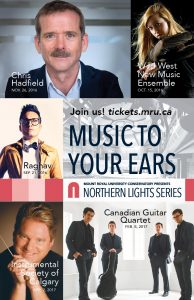 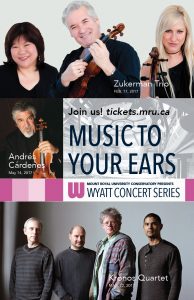 Andres Cardenes with the Calgary Youth Orchestra – Sunday, May 14, 2017 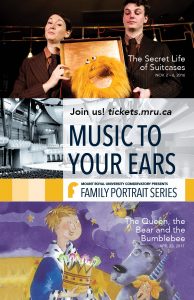 We’re proud of our MRU Conservatory instructors. So, we’ve created a series that allows them to shine. The final line-up to be announced in Fall ’16.

FOUR spectacular evening shows in the style of the salons of France in the 1920s and 30s. It’s the perfect occasion to get a table of friends together, raise a glass and enjoy some tunes. The final line-up to be announced in Fall ’16. 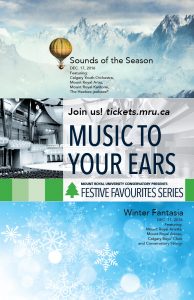 While not a series itself, we’ll still be offering many concert events featuring our amazing music and speech arts programs at MRU Conservatory. Our festive favourites continue with Winter Fantasia and Sounds of the Season (with guest hosts: the Heebee-jeebees). These events feature performances from our choral, orchestra and speech arts programs that are sure to get Calgarians into the spirit of the season.

Welcome to the new sound of MRU Conservatory. Tickets are available on June 1, 2016! The early birds get… the best seats.

With a 25% discount when you purchase tickets for a whole series (Soundscape, Travelers, Northern Lights or Wyatt) that’s certainly Music to Your Ears!