“Beethoven is pretty cool, but there have been a few guys and girls composing after him,” says true musical maverick Melanie Leonard.

Leonard is founder and Music Director of the Wild West New Music Ensemble and the newly appointed Music Director, Sudbury Symphony Orchestra. Calgarians remember her well from her four years as Associate Conductor of the Calgary Philharmonic Orchestra, but she promises to bring something new to the stage in the Fall, “I have a passion for new music and bringing people to beautiful music they don’t get to hear very often.”

The concert, titled Baroque Minimalism is a part of the MRU Conservatory “Music To Your Ears 2016-17” Concert Season in the Taylor Centre for the Performing Arts’ Bella Concert Hall. The program features works by minimalist composers Phillip Glass, Marjan Mozetich and Steve Reich who are all considered major influences on minimalist music.

Glass is perhaps the best known to audiences due to his scoring of award-winning films including “The Truman Show” and “The Hours”. Leonard has invited renowned organist Neil Cockburn to join the ensemble for his Harpsichord Concerto, a time-traveling sonic experiment. Both composer and performer are,“using an ancient instrument in a modern way,” Leonard describes, “extending it into another era.”

The ensemble will be composed of up to twelve instrumentalists, depending on the requirements of the piece and, in one case, will feature some pre-recorded vocal interviews. In1990, Steve Reich won a Grammy for Different Trains based on the train journeys he made in America during WWII. Had he been in Europe at the time, the train ride might have been destined for Auschwitz. In the piece, Reich uses the cadence of the human voice from the recorded interviews to dictate the musical melody of the strings. “You’ll hear a conversation onstage between the voices and the instruments,” Leonard promises. It has been described by The New York Times as, “a work of such astonishing originality that breakthrough seems the only possible description… an absolutely harrowing emotional impact.”

Rounding out the program is one of the most broadcast classical composers in Canada. Marjan Mozetich’s Baroque Diversions, featuring Marcin Swoboda on viola, will resonate in the hall and with audiences alike. Leonard is pleased to be shining the spotlight on, “masterworks of the 20 & 21st Century with this work by a living Canadian composer.” Her motivation is simple, “I want people to appreciate the music that every century has to offer.”

Whether it’s a new audience for classical instrumentation or new works for a classically trained audience, Leonard is sure of one thing, “Beethoven would be all for it.”

MRU Conservatory is pleased to welcome the Melanie Leonard and the Wild West New Music Ensemble at the Bella Concert Hall in the Taylor Centre for the Performing Arts on Saturday, October 15th, 2016 at 7:30pm. For tickets or more information, go to mru.ca/enjoy or call 403-440-7770. 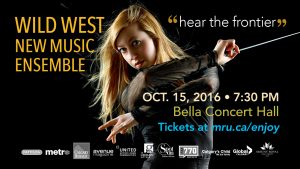