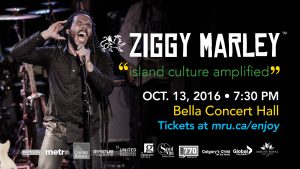 The technicians at the Bella Concert Hall are ‘geeking out’.

Al Williams and Owen Day are the audio and lighting gurus preparing for the advent of a new sound in the concert hall. “For the first time in the Bella, we’ll be bringing in a bunch of sub-woofers,” Williams says, practically rubbing his hands with glee.

The reason is the upcoming appearance of reggae legend Ziggy Marley and his band on October 13, 2016. Marley and crew will kick off the inaugural concert season at MRU Conservatory called Music to Your Ears 2016-17. From an auditory perspective, there’s certainly a lot of diversity in the season, which features such varied guests as Wu Man (Chinese pippa player), the Pedrito Martinez Group (Afro-cuban drummers) and Chantal Kreviazuk (Canadian pop singer/songwriter).

This will mark the first occasion that reggae music will resonate in this concert hall.

For a brand new space, it certainly isn’t missing anything. Williams notes, “We have subwoofers in the building, but they’re primarily designed for the acoustical space. With Ziggy’s band and their type of music, there’s a tremendous amount of low frequency energy that’s involved in the show. So, we’re bringing in seven Meyer 700 HP double 18 Sub-woofers.”

For those unfamiliar with the audio brand, the best explanation Williams can offer is, “It will rattle the rafters.“

Lighting technician Owen Day echoes the excitement, “It’s definitely exciting to be doing bigger events. We have more technology and more toys to play with to provide a better show.”

What’s expected in an event like Marley’s is a rock concert event, which is a far cry from the technical demands of a solo violinist in recital or a keynote speaker. To illuminate Marley’s stage, Day says, “We’re adding more lights featuring lots of colour in the LED world.” LED meaning ‘light-emitting diode’, a technology that is making stage lights, as well as indoor Christmas lights, more energy efficient, easier to manipulate and brighter.

Day admits to the scope of this reggae event, “That’ll be the full use of sound system and the lights. I’ve seen his (Ziggy’s) rider and we’ll test the limits of the space.”

Brighter and louder will describe the Bella Concert Hall’s contributions to the Calgary music scene.

For those lucky enough to get tickets to the event, it’ll be spectacular. Day has been listening to exiting audience members from his booth at the back of the hall, “Everybody loves it. At least one person comes by and says ‘the space is amazing.’” Having that reaction motivates the positivity of the tremendous work required to make each show look and sound good. Day is in his zone, “It’s the dream. The kind of job you love coming into every day.”